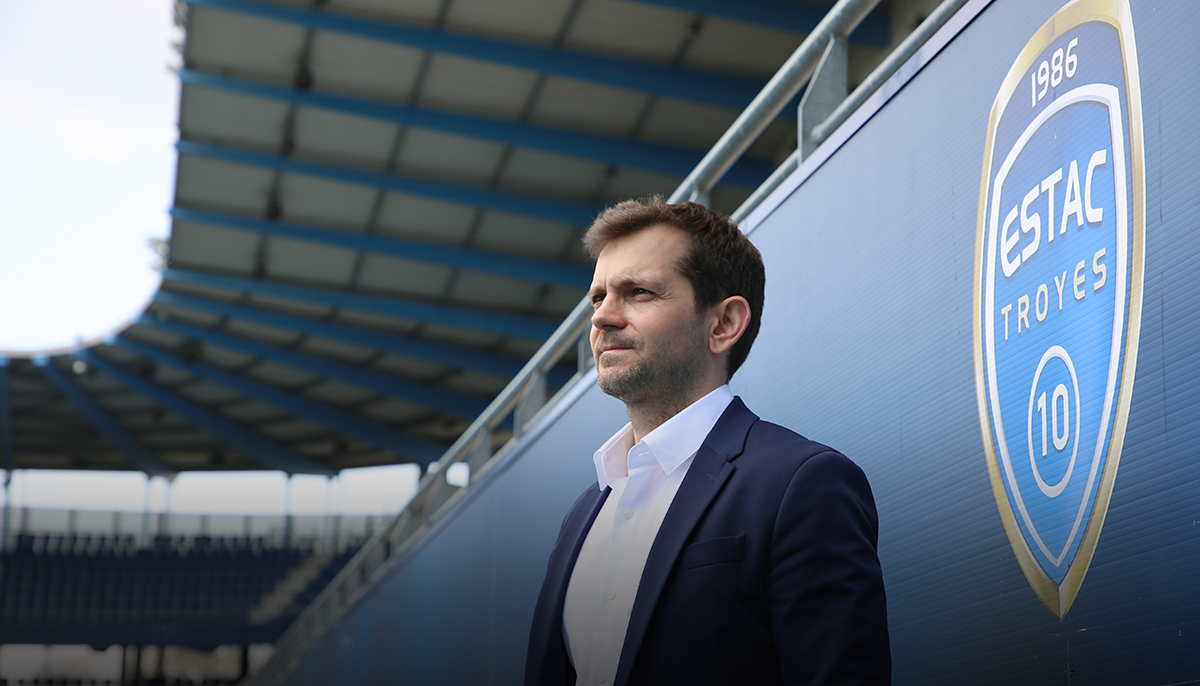 City Football Group and ESTAC are pleased to announce the appointment of Aymeric Magne, as Executive Chairman and General Manager of Troyes. Installed in the management of the club, he will be responsible for the management and development of SASP ESTAC.

A native of the Paris region, Aymeric Magne has nearly 20 years of experience in the world of sport and entertainment , in France and internationally. He completed his university studies in France, first at the University of Evry-Val d’Essonne (Master in Land Use Planning and Development, specialization in sport), then at the University from Rouen Normandie (Masters in Marketing and Professional Sport Management) before obtaining the Stadium Manager diploma within the CDES of Limoges.

Aymeric Magne began his career as a consultant in the management of sports equipment and TV rights, he participated in the marketing of the rights of the UEFA Champion’s League in Africa between 2003 and 2005. During this period, he supported communities, clubs and investors in development of stadium projects such as those in Valenciennes, Le Havre, Marseille, Nice, but also participated in the development of the Stade de France and the Parc des Princes.

In 2007, he joined Colony Capital and continued his consultancy missions on sports arenas (in particular the stadiums of Lille, Nice, Bordeaux, Lens and Le Havre). It successfully participates in France’s candidacy as host country for UEFA Euro 2016.

With significant experience in the field of sport, Aymeric Magne also held the post of Deputy Secretary General of ESSMA from 2003 where he participated in the development of the association, allowing it to become an actor influencing the reflections on sports arenas in Europe, until 2011.

In 2011, he joined Lagardère Sports (now Sportfive) as Project Director for major sports facilities and major international sporting events. He has also been involved in the organization of large-scale events such as the 2013 World Equestrian Games or the UEFA Euro 2016.

In 2013, Aymeric Magne was promoted CEO Brazil and LATAM of Lagardère Sport, where he participated in the creation of offices in Latin America, in the strategy and in the development of the group’s activities. He managed the management of the Castelao (Fortaleza) and Independencia (Belo Horizonte) stadiums with sporting and commercial success for the resident clubs and the Lagardère group. He also participated in the organization of the 2014 FIFA World Cup as well as the Rio 2016 Olympic Games, and developed new event experiences (music / sport / eSport).

Since May 2018, Aymeric Magne has returned to France, where he joined the Disney group, the world leader in entertainment taking on the Events Department at Disneyland Paris. In charge of strategy, development and event operations, he is the initiator of many innovative experiential projects, particularly in sports, eSports, music and entertainment events.

Since January 2021, he has also been a member of the ‘Experience Stades’ commission of the Professional Football League.

With a strong managerial experience, benefiting from positions of high responsibility at national and international level, Aymeric Magne perfectly crystallizes the ambitions of structural, commercial, sporting and fan experience development for Troyes.

“ It is with great joy that we welcome Aymeric to the City Football Group, who is joining ESTAC as Executive Chairman and CEO. We took special care in choosing the right person for the project in Troyes.

Aymeric has extensive local and international experience, his knowledge of the global environment of French football is undoubtedly an asset. I look forward to working with him, to help us realize the projects we have for ESTAC.”

“ It is a real satisfaction to be able to rely on a profile such as that of Aymeric, to develop ESTAC within the CFG. He will embody the face of the club on a daily basis and will be the privileged executive relay to the board of directors. He supervises the administrative and sports aspects with the mission of structurally developing the club, while relying on the pooled skills of the group.

He will be able to rely in Troyes on extremely competent and high-quality teams in place.

Welcome him to Troyes. I invite all the stakeholders of the club to give him the best welcome and support him in his new functions. ”

” It is an immense honor to be able to join ESTAC, which is part of one of the most serious, structured and innovative projects in football through the City Football Group, allowing to offer ambitious prospects for the club .

ESTAC is a historic French football club, located in a very dynamic city of Troyes, which will have to be made to grow and shine at the national level.

I would like to thank the City Football Group for the confidence it has shown in me to carry out this project, and I will, as of now, prepare for next season with the ESTAC teams, the objective of which is to register in a sustainable way the ‘ESTAC in the elite.

The club is fortunate to be able to rely on very competent teams, both sportingly and administratively, who have participated in the development of a club which today enjoys a very good image. “

This article has been translated from the original in French here.